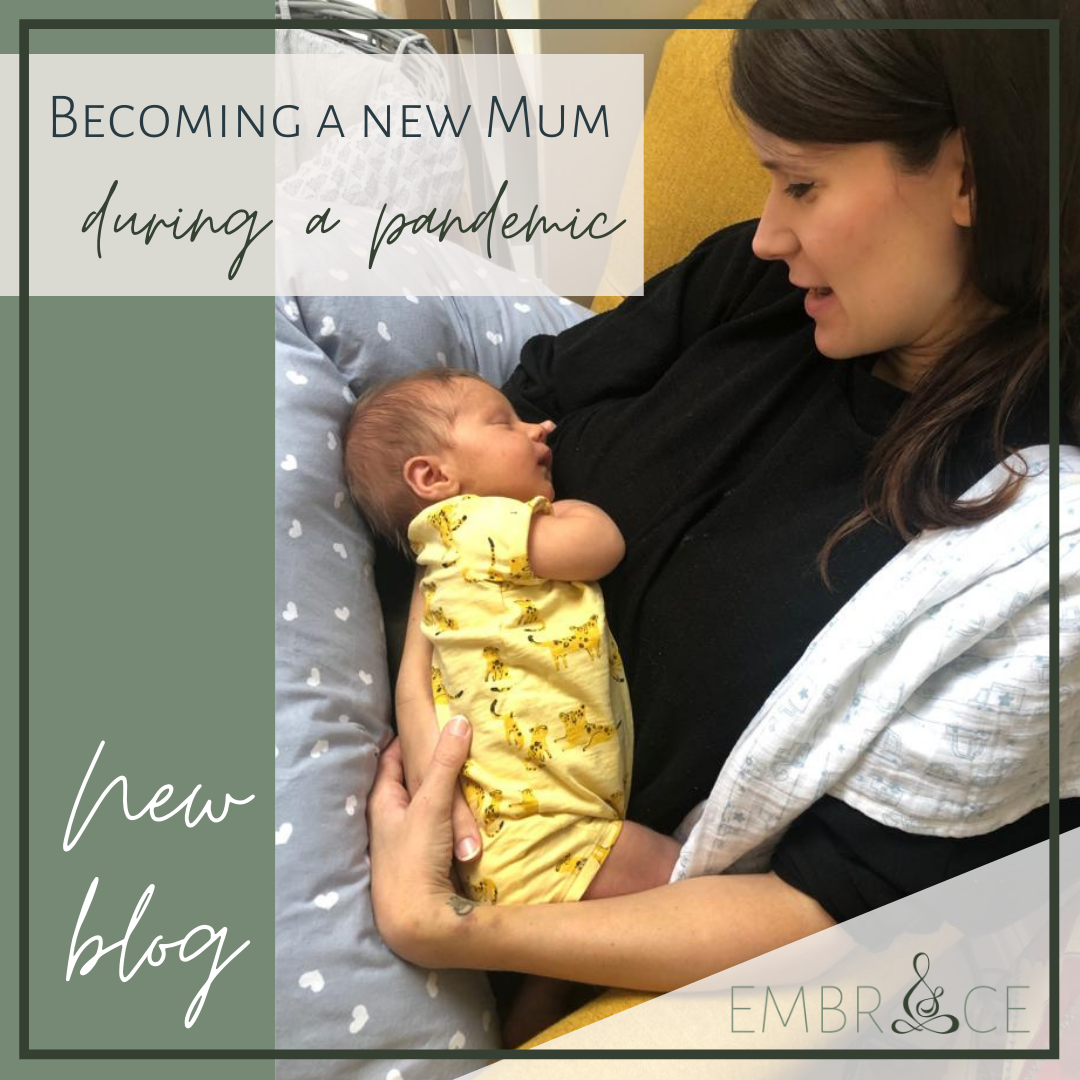 Like so many others, I had my son during the pandemic, which made an already difficult time in my life just that little bit harder. We did the usual antenatal classes (which had to be delivered online) and I also tried reading many books and listening to many podcasts about hypnobirthing, because I was quite terrified at the prospect of giving birth! I was lucky and had a good pregnancy with no real complications. Work were very thoughtful and ensured my safety by letting me work from home, even before this was a government recommendation.

Although most of my friends and family didn’t even get to see me whilst pregnant, we felt as ready and prepared as we could ever be before birth.

I had read many books, listened to my hypnobirthing mantras daily, had my hospital bag packed and all the baby equipment we could think of ready and waiting at home.

The birth was, however, tricky. After a long time in active labour, a failed attempt at a water birth, an episiotomy and a ventouse birth later, my son was born! It was of course, an incredible time, however I cannot shake the feeling that it was somewhat tainted by the fact that covid had taken over. Apart from the fact that my husband wasn’t able to attend the scans before birth, he also wasn’t able to be in hospital with me for the two days immediately afterwards. I had been around children my whole life, I had grown up with a large family, I had worked as a teacher of young children for years, however nothing prepares you for becoming a first time Mum.

And then to be wheeled away from the one person who you relied on just hours after a traumatic event, was even more…traumatic.

In the months after birth, I wasn’t able to see my friends and family in the way that new parents should. Everyone had to wear masks, I was nervous for even my closest family to touch my baby without sanitising their hands first or covering up in PPE! It caused me great sadness that my own parents couldn’t watch my baby son grow, as he learnt to smile, laugh, chatter and crawl. Chats with my new Mum friends were often focused around ‘do you let other people near your baby without a mask?’, or our meet ups were limited to walks with a restricted number of us (as the limits for social gatherings also included our newborns – madness right?!). Baby classes were limited and only running online, and postnatal medical appointments were sparse to say the least.

During all of this however, my son was thriving.

Breastfeeding took time to establish, he had tongue tie, experienced colic and A LOT of vomiting after feeds, a possible dairy intolerance, we attended both osteopathy and chiropractic appointments, as he was clearly struggling with his food. He also sadly missed out on a huge number of experiences (online baby sensory classes just didn’t do it for him when I thrust a screen into his face which began singing and flashing lights at his newborn eyes!). However, he spent almost his whole first year at home with his Mum and Dad. Luckily it meant that both of us could be at home rather than his Dad going back to work 2 weeks after paternity leave. He was nurtured. He was fed when he needed feeding, slept when he needed to sleep (mostly), comforted when he needed comfort, which all meant he was able to feel secure in his home environment with the two people that loved him most.

He began getting to know the outside world slowly, experiencing new and exciting places, people and toys at a slow and steady pace, rather than being forced into a new world with minimal time to adjust.

He now absolutely loves his wider family, he loves meeting our friends, going to new places and just experiencing the world. If there is another lockdown, then he’ll undoubtably miss those experiences again. But to be able to spend some more time, in his home, with his parents by his side, what more does he need? Learning the art of infant massage has taught me one resounding fact of life, babies don’t need the fancy toys, the expensive gifts, and numerous experiences and trips out to the latest attraction to keep them occupied. They help, certainly, but they aren’t what will nourish him as he grows.

It’s communication, nurturing touch and interaction with those who he trusts most that will be the building blocks he needs to develop social skills, relationships and trust with others around him.